Robinho furious at Pele for claiming he is on drugs 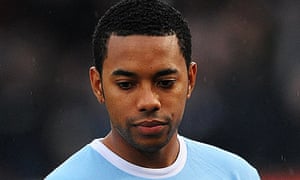 Brazil is famous for many things – beautiful beaches, colourful street parades, slightly gay-looking currency – but if the claims of Pele are to be believed, the South American nation may soon gain a reputation for footballers who dabble with naughty substances.

During a private tourism event, the legendary erectile dysfunction solution advocate claimed (Fat) Ronaldo and Robinho had been on the cocaine while attending a private party in Sao Paolo:

“It is unfair to talk about drugs in football because of just one or two cases, like Ronaldo and Robinho, who have that problem.”

Pele may have been caught out revealing an unspoken truth about Brazilian football, but it is more likely he was trying to divert attention away from the curious case of his son Edinho, who was a known cocaine user and suspected drug trafficker.

After Robinho’s hilariously bad penalty kick yesterday (3.15 above), a spokesman for the Brazilian pooh-poohed his accusation:

“We strenuously refute any such suggestions. The notion of him taking drugs is absurd and we completely deny it.”We are trying at this moment to get Pele to clarify the situation.

“We think these comments have been genuinely misunderstood or got lost in translation.”