This is Japan’s tribute to Paul. Srsly. 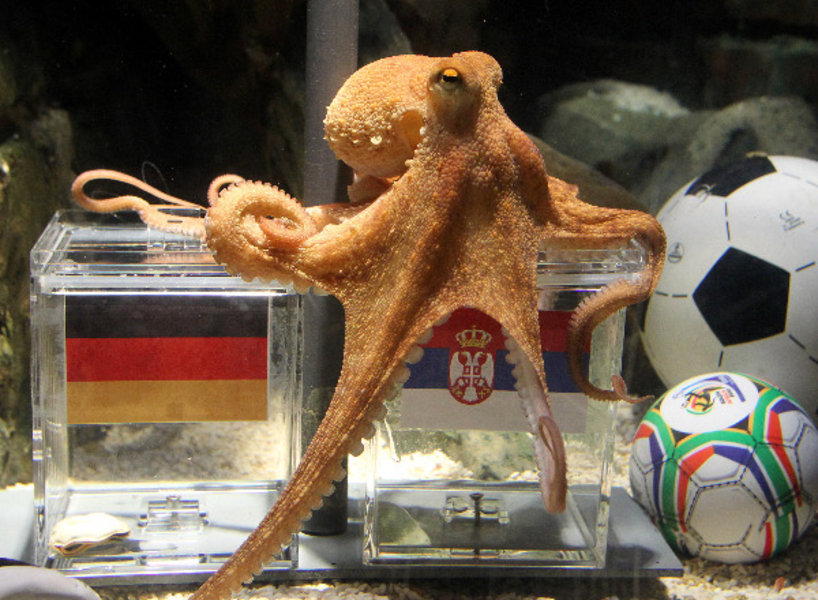 While the world mourns for England’s Rose, Paul the Psychic Octopus, a Chinese film director yesterday claimed the real Paul died THREE MONTHS ago and had actually since been replaced by a Decoy Octopus.

Jiang Xao, director of taut suspense-thriller Who Killed Paul the Octopus? has told the Guardian (who have three reporters working on this story) that she was 60-70% sure Paul had been merk’d in July, two days before the World Cup final:

Explaining how such a deception could have been perpetrated, she added: “[Octopuses] all look the same. It is impossible to tell the difference.”

Jiang said she thought it was “kind of strange” that news of Paul’s death had broken not long after the Oberhausen Sea Life Centre in western Germany had contacted her team to say they were keen to co-operate on the international distribution of her film.

“We have been keeping in touch with the German aquarium ever since the beginning [of production] but it seemed to me that they were afraid,” she said. “The movie is about unveiling the inside story behind the octopus miracle, so they felt nervous.

It’s certainly not true that Paul died in the summer,” said a spokeswoman for the aquarium.”We can absolutely assure you that he died last night. He was about two and a half, which is the average age for an octopus. He died a simple and straightforward death.

Yeah, right. We want the truth, lady. Justice for Paul! Fake Paul is to be cremated in a couple of days and “placed in an urn and displayed in a shrine, along with a portrait and video clips from his life.” The Spoiler actually laughed out loud at that bit.

We’ve already set up a condolence book where people can write their tributes to Paul.

Tagged With : Paul the psychic octopus